THE 70th SEASON OF THE TEATRO LIRICO SPERIMENTALE DI SPOLETO

THE 70th SEASON OF THE TEATRO LIRICO SPERIMENTALE DI SPOLETO

FROM ALBERTO SAVINIO TO GIUSEPPE VERDI

GIOACHINO ROSSINI PROTAGONIST OF HIMSELF, SCHUBERT ON STAGE AND THE REDISCOVERED 18th CENTURY

FROM AUGUST 12th TO OCTOBER 1st, 2016 IN SPOLETO AND IN UMBRIA’S MOST IMPORTANT THEATRES

OPERA IN ALL ITS FORMS; MAKING SPACE FOR ALL THAT IS CONTEMPORARY

THE 70th SEASON OF THE TEATRO LIRICO SPERIMENTALE DI SPOLETO \”A. BELLI\” 2016

ORFEO VEDOVO BY ALBERTO SAVINIO. EHI GIO’, A NOVELTY BY THE COMPOSER MONTALTI. SCHUBERT’S LIEDER: SCHWANENGESANG PROPOSED AS A SHOW. THE “FORGOTTEN” INTERMEZZI BY DI FRANCESCO FEO. UN BALLO IN MASCHERA BY VERDI.

OFFICIAL POSTERS FOR THE 70th SEASON DONATED BY THE FAMOUS ARTISTS FRANCESCO CLEMENTE AND RUGGERO SAVINIO.

Spoleto, July 14th 2016. Following the success of La Bohème in the well-received tour of Japan that has just drawn to a close (14 performances in 13 cities including Tokyo, Osaka, Nagoya, Fukuoka, Kobe etc. from June 14th to July 4th) conducted by Carlo Palleschi and directed by Giorgio Bongiovanni, with Carmela Remigio as the guest star for a number of performances, the Teatro Lirico Sperimentale di Spoleto \”A. Belli\” celebrates its 70th anniversary with a varied opera season ranging from contemporary music to Italian 20th century opera, from the Lieder to 17th century music and to a more mature Verdi. The season begins on August 12th and 13th (6 p.m.) at the Complesso di S. Nicolò di Spoleto with a musical event entitled Eine Kleine Klostermusik created by Daniele Lombardi and Michelangelo Zurletti, dedicated this year to Italian 20th century music. The subtitle Orfeo Mon Ami, emphasises the various and different ways of interpreting the myth of Orpheus and the classical nature of the “eighties generation” composers Gian Francesco Malipiero, Ildebrando Pizzetti, Alfredo Casella, Ottorino Respighi and Franco Alfano (with Enrico Cicconofri at the piano and Luca Spinosa accompanying the singers of the Lirico in the many theatrical musical performances programmed by Lombardi). The event will  culminate in the production of the only pièce of musical theatre by Alberto Savinio, Orfeo Vedovo (thanks to permission granted by his heirs and in particular his son Ruggero Savinio who offered us one of his father’s works for the theatre’s 70th anniversary). Orfeo Vedovo is a title often spoken of but almost never performed and, after decades, Spoleto proposes it again with all its scathing irony immersed in the surreal metaphysical setting envisaged by Savinio himself. The opera will be directed and conducted by Daniele Lombardi, the eclectic Florentine artist who re-proposed successfully an anthology of musical Futurism, always for the Spoleto ‘Sperimentale’, last year. From the 20th century to Contemporary Music, the “Progetto Opera Nova”, so dear to the Teatro Lirico Sperimentale, has provided a stage for new compositions for two decades. This year the composer is the young and successful artist Vittorio Montalti (Leone d’Argento for music at the 2010 Venice Biennale), who will take centre stage with an opera commissioned by the Spoleto ‘Sperimentale’ entitled Ehi Giò – Vivere e sentire del grande Rossini (life and feelings of the great Rossini), libretto by Giuliano Compagno. The opera is dedicated to Gioachino Rossini and above all to some less known and controversial aspects of one of the world’s most acclaimed  composers. The instrumental ensemble of the ‘Sperimentale’ will be conducted by Enrico Marocchini, a specialist in the repertoire of our time. This opera will be directed by Alessio Pizzech, a successful director who is not new to the Spoleto ‘Sperimentale’, set designer Davide Amadei. In addition to the singers of the Institution, the actor Emanuele Salce and the performer Giuseppe Nitti will also perform. The performances will takes place at the Teatro del Complesso di S. Nicolo’ di Spoleto on September 9th (at 8:30 p.m.), September 10th (at 8:30 p.m.) and September 11th (at 5 p.m.).

Once again, and at last at the Teatro Caio Melisso – Spazio Fendi, the perfect location designated to 18th Century music, two “forgotten” intermezzos will be performed on September 16th and 17th (at 9 p.m.) and on September 18th (at 5 p.m.). Rosicca and Morano, two intermezzos by Francesco Feo, who is one of the greatest Neapolitan musicians of his time, will be performed in a new version by Ivano Bettin, as a result of the cooperation between the Lirico di Spoleto and University of Milan – Centro Studi Pergolesi, directed by Professor Claudio Toscani. This performance will be conducted by the Maestro Pierfrancesco Borrelli, a sophisticated conductor and musician as far as  the Baroque repertoire is concerned. The intermezzos will be directed by Giorgio Sangati, an eclectic actor and director who has been Luca Ronconi’s closest assistant at the Piccolo in Milan since 2011. It was at the Piccolo that Sangati successfully inaugurated the last season with Goldoni’s Le donne gelose. Set designer Alberto Nonnato. The director and author Stefano Monti will present a unique evening on September 21st (at 9 p.m.) once again at the Complesso di S. Nicolo’, with Schwanengesang, a series of Lieder by Schubert, in a concert entitled Nostalgia di primavera. Once again, as for the past ten years, the Teatro Lirico Sperimentale is presenting Lieder music (Lieder & Lieder 11) and, once again, \”staging it\”. According to the creator and director Monti, the Complesso di S. Nicolò will be “redefined, as the spectators will seat in a specular and dialectic way. People will not be aligned in an anonymous parterre immersed in the darkness anymore, but there will be a mirroring of faces amidst lights and shadows.” In addition to the singers Beatrice Mezzanotte and Alec Roupen Avedissian, accompanied by the pianist Enrico Cicconofri, this performance will be choreographed by Monique Arnaud. Narrating voice Rossana Bassani. Images by the artist Vincenzo Balena. This event will be directed by Stefano Monti who is also the set designer.

A new production of Un ballo in maschera by Giuseppe Verdi is programmed for September 23rd (8:30 p.m.), repeat performances on September 24th (8:30 p.m.) and September 25th (5 p.m.) at the Teatro Nuovo di Spoleto (preview on September 20th at 6 p.m. and performances for schools of the Region held at 10 a.m. on September 21st and 22nd in Spoleto). The opera will be conducted by Marco Angius who is returning to the ‘Sperimentale’ after years spent conducting contemporary operas and the personal success achieved in 2014 at the Spoleto ‘Sperimentale’ with Gianni Schicch by Giacomo Puccini and Alfred, Alfred by Franco Donatoni. The interpretation of the opera, as Angius says, must not be taken for granted: “For me this is a great opportunity to measure myself with a composer like Verdi and with such a title, because Un ballo in maschera offers an endless number of ideas and implications that cannot be taken for granted or learned through the history of its interpretations”. The direction, the set and the costumes will be equally spectacular and all curated by Stefano Monti, fresh from his recent success on a number of Italian stages and who has been studying this opera for months. “From a structural perspective, I was partly inspired by the ideas of Adolphe Appia and Gordon Craig, in which the centrality of the singer permeates and engrosses a totalising and three-dimensional space. All this will be accompanied by special lighting techniques aimed not at acting as a backdrop, but rather as a real dramaturgic element to orient the setting itself. Based on a novel by Eugène Scribe, the libretto of Un ballo in maschera is filled with betrayals, enchantments and intrigues as well as revenge and forgiveness. These are the explosive dramaturgic elements that Verdi gave life to in a score filled with melodies that instantly became popular. A number of critics have seen, especially in the famous love duet, affinities with ecstatic Wagnerian abandonment. The musicologist Massimo Mila describes it as \”Verdi’s Tristan and Iseult\”, and not only because of the impossible love between Riccardo and Amelia, his best friend Renato’s wife (reminding one of the Tristan-Iseult-King Mark triangle), or the magic potions and deadly prophecies of the sorcerer Ulrica. There is no doubt that this is one of Giuseppe Verdi’s most mature and successful operas. After Spoleto, this production will be programmed within the framework of the regional opera season, sponsored in cooperation with the Umbria Region, in the most important theatres; September 26th and 27th at 8:30 p.m. in Perugia at the Teatro Morlacchi, on September 28th at 8:30 p.m. in Assisi at the Teatro Lyrick, on September 29th at 8:30 p.m. in Città di Castello at the Teatro degli Illuminati, on September 30th at 8:30 p.m. in Todi at the Teatro Comunale and on October 1st at 8:30 p.m. in Orvieto at the Teatro Mancinelli.

There are two other no less important events programmed; the concert performance entitled Une soirée à Paris, music by Malipiero, Savinio and Offenbach (passages from the operetta Ba-Ta-Clan) with the participation of Daniele Lombardi at the Santa Chiara Auditorium in Sansepolcro on August 26th at 9 p.m within the framework of the Città di Castello Festival delle Nazioni. On July 28th at 9 p.m. in Riano, there will be an opera concert held by the singers who won the 2016 competition of the Spoleto Sperimentale, organised as part of the “Festival del Teatro alle Cave 2016” .

ORCHESTRA, CHOIR AND TECHNICIANS FROM THE TEATRO LIRICO SPERIMENTALE

For the 70th anniversary of this Institution, the famous artists Francesco Clemente and Ruggero Savinio donated their works of art for the three posters.

The production of the Opera Season in Spoleto and in Umbria has been made possible thanks to the irreplaceable support provided by the Ministry for Cultural Heritage and Tourism, the Umbria Region and the Municipality of Spoleto as well as the essential contribution provided by the Cassa di Risparmio di Spoleto Foundation, which, among other things, made it possible for us to open the Belli-Argiris Study Centre, which is the Historical Archives of the Teatro Lirico Sperimentale in Piazza Bovio in Spoleto (open to the public every weekend in September – Tel. 0743-221645)

Special thanks to the Francesca, Valentina and Luigi Antonini Foundation, to Mrs. Nicoletta Braibanti Valletti, to the Savinio Heirs, to Francesco Clemente, Ruggero Savinio, Ester Grossi and Erika Zolli.

Heartfelt thanks for their cooperation also go to the Municipality of Spoleto, the Municipalities of Perugia, Assisi, Città di Castello, Orvieto and Todi, Riano, the Savings Banks in Umbria and the Credito Cooperativo Bank in Riano.

Bookings and tickets at TICKET ITALIA from July 9th www.ticketitalia.com 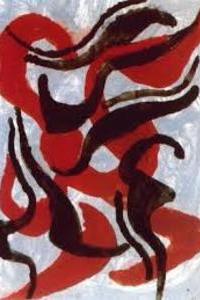 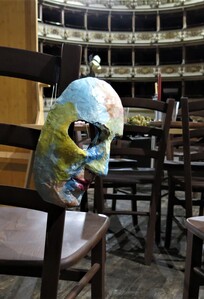 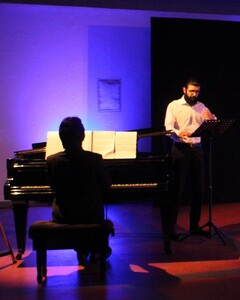 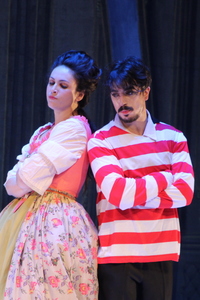 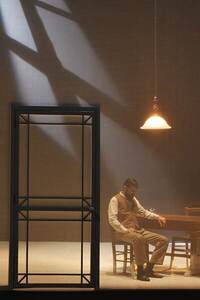