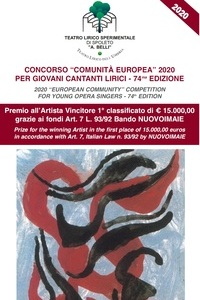 PRESIDENT OF THE JURY GRACE BUMBRY

AMONG THE MEMBERS OF THE JURY RENATO BRUSON

THE COMPETITION WILL TAKE PLACE AT THE TEATRO NUOVO IN SPOLETO FROM THE 26th TO THE 29th FEBRUARY 2020 – APPLICATION DEADLINE: 13th FEBRARY 2020

For the 74th “European Community” Competition a PRIZE for the Winner Artist, in the first place, by Nuovo Imaie (Nuovo Istituto Mutualistico Artisti Interpreti ed Esecutori is a collecting society dealing with the performer’s neighboring rights). Eur 15.000,00 distributed in accordance with the specific conditions presented in the Notice of applications of the Competition. The Teatro Lirico Sperimentale di Spoleto “A. Belli” under the aegis of the Ministry of Cultural Heritage, Department of live Performance, Regione Umbria,  under the patronage of the European Commission, presents the 74th edition of the

The Competition is open to all young artists who, on January 1st, 2020 will be under 32 years of age, if sopranos and tenors, or under 34 years of age if mezzo-sopranos, contraltos, baritones and basses; Legal requirements: they must be citizens of one of the European Union (EU)Countries , or coming from one of the EFTA Countries (Iceland, Liechtenstein, Norway, Switzerland), or citizens of one of the Countries candidate to enter in the European Union, or from those potential candidates  Countries which can apply to European cultural programs (Creative Europe) by April 30th, 2019 (Albania, Republic of North Macedonia, Montenegro, Republic of Serbia, Armenia, Tunisia, Bosnia and Herzegovina,  Moldova and Georgia, Ukraine and Kosovo (under UN Security Council Resolution No. 1244).

The International Jury will be presided over by the internationally renowned Soprano Grace Bumbry (https://en.wikipedia.org/wiki/Grace_Bumbry). Among the jury, there will also Renato Bruson (baritone), Carlo Palleschi (Conductor) and Michelangelo Zurletti, Artistic Director of Teatro Lirico Sperimentale di Spoleto, as per the art. 5 of the competition Announcement.

The competition winning candidates will be admitted to attend a two-years COURSE OF STUDIES, lasting 5 months each year, with the purpose to prepare them for their debut. Among the teachers of the Debut Preparatory Course 2020, there will be Renato Bruson and Marina Comparato among the main teachers for vocal interpretation; Giorgio Bongiovanni and Andrea Stanisci; Maestri Marco Boemi, Raffaele Cortesi, Enza Ferrari and Carlo Palleschi for scores study. There will be also imparted lessons on theory and scores, current legislation on live stage performances and music and stage movement. There will be a module on Artists’ welfare and RIGHTS.

The winners of the competition will be awarded of a monthly SCHOLARSHIPS gross worth monthly Euros 700,00. At the end of the course, the winners will debut in the 2020 edition OPERA SEASON usually hold in September.

The 2020 edition of the competition “European Community” for young Opera singers has been funded with a contribution of a settlement fund by “Nuovo Imaie” in accordance with art. N. 7, Italian law n. 93/92- musical area, in favour of the winning artist who will achieve the higher score according to the criteria established by this competition announcement.

No registration fee on 2020

Applications should be sent via email to segreteria.artistica@tls-belli.it or to segreteria@tls-belli.it or via posta to Teatro Lirico Sperimentale di Spoleto “A. Belli”, Piazza G. Bovio 1, 06049 Spoleto (PG) – by February 13th 2020. The competition will take place at the Teatro Nuovo in Spoleto from the 26th to the 29th February 2020.

Detailed information and the competition regulations can be obtained by applying to: