BACK TO OFFICE E VENUES 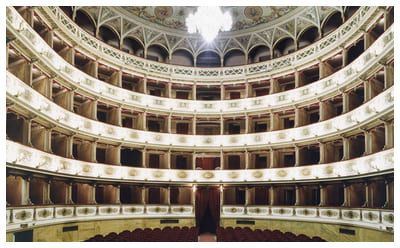 Sixty-eight well-deserving citizens set up a company for the construction of a new theatre with a first act in 1840, then completed and better defined with another act on February 24th, 1843.91 shares were underwritten for the amount of 216 scudi each: the maximum of the expense for the construction of the theatre was determined in 22.080 scudi. The Commune decided to build the theater on February 13th,1846, considering the necessity of a new theatre because of the "narrow and filthy ancient theatre ". From 1846 to 1851 there was a period of standstill in the planning jobs, which comes up to an end on April 15th, 1851. In 1852 it was settled that the theater had to rise in the center of the city, close to the place where the monastery of S. Andrea church rose. The desire of citizens to see the New Theatre reached the point that was tried to set fire to the Noble Theatre so that this drastic provision could prevent to waste huge sums of money for the restoration of the old theater instead of to assign them for the construction of the new one. The plan of the theatre was of Ireneo Alendri, author of the Sferisterio of Macerata, the Theatre of Ascoli and S. Severino. To Luigi Masella, decorator of many theatres (such as the Argentine and the Apollo of Rome), was assigned to execute the stucco decorations, the paintings of the hall and the curtain. Carl Bazzani, roman painter, was charged with the execution of the understudy; Peter Recanatini, a craftsman, made the scenes at historical feature; Eugene Venier the adjustment of all machinery. 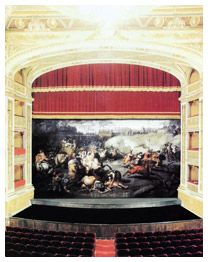 Added to Teatro Nuovo there is the striking concert hall named “Sala XVII Settembre”, painted by Aleandri and decorated with stuccos by Cesare Bazzani and a very interesting wall painting pictorial art cycle by G. Costantini representing the rural Italy and Italy as home of arts. The hall was opened in 1910.
Added to the theatre there is also an interesting Museum founded by A. Belli with posters, photos, autographs (there are also letters from Rossini and Verdi) which prove the important theatrical life of Spoleto.
At present all the historical documents are kept at the record office of the town hall.
On the opposite walls of the Hall there are the commemorative dates of the fiftieth anniversary of the United Italy (1860 on the east side wall and 1910 on the west side wall).