BACK TO OFFICES E VENUES 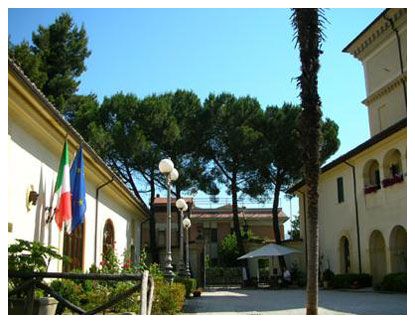 In 1603 the place was occupied from a perpulchrum palatium of Gerolamo Martorelli, one of the most ancient families from Spoleto; at the end of the 18th century the villa went into an inheritance to Fabrizio Loccatelli (patrician of Cesena and brother of Francesco Maria bishop of Spoleto) who completed the renewal of the buildings. The villa was bought from Francisco Marignoli and then it was sold approximately in 1825 to pope Leone XII and later on from the pope’s heirs to Filippo Marignoli son of the old owner (from here comes the name “Redenta”). The villa becomes property of the PP. Minori Conventuali who change it in the center of the Missionary College of St. Anthony. In 1973 the villa has been bought from the Province of Perugia. Near the atrium, decorated with figures of Napoleonic soldiers, an inscription, placed in 1805 from Fabrizio Loccatelli, reminds the hospitality given to the pope Pio VII on the outward journey from France. The atrium was adorned with marble busts in the form of great cameos of pope Pio VI (by Giuseppe Angelini and Vincenzo Pacetti, 1784) and pope Pio VII (by Vincenzo Pacetti, 1804), which were detached and sold in 1953; the busts have been bought in 1978 from the bank “Cassa di Risparmio of Spoleto” where the busts are currently conserved.Near the park, a porch is flanked with two small symmetrical views, one of which corresponds to the old family chapel built in 1804; from this porch is possible to reach a hall with a precious ligneous ceiling decorated according to the lively and spectacular style of Filippo Marignoli. From the main building a café-house breaks away, a building in late rococo style decorated with stucco and gildings, otherwise the beautiful park with a wide grassy carpet and a fountain with obelisk represents the neoclassic style.In spite of the serious alterations and the strong losses endured, especially in the last few decades, the vegetation of Villa Redenta preserves an important cultural and environmental value still today.(source: L'Umbria, Manuali per il territorio, Ed. Edindustria Roma 1978)