BACK TO OFFICES AND VENUES 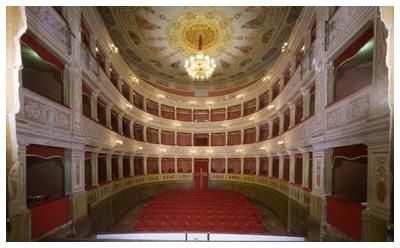 The Theatre Caio Melisso comes down through numerous transformations, from the most ancient theater of Spoleto. In fact the “Noble Theatre” of Spoleto, built around 1600 with a structure entirely in wood, was restored and enlarged in the 19th century. The first order of theater boxes was built on 1674 and the first performances date back to 1677 with “Amore non vuole politica”, and to 1745 with “La Flora”. From 1749 to 1751 important restoration works were carried out and in this occasion each order was enlarged up to 18 boxes. The "Noble Theatre" was renewed many times but before the transformation of the architect Montiroli it had always a wooden structure: in 1751 it was enriched of pictorial decorations, curtains and scenes, excellent pieces of work, and for the reopening Iommelli set to music the "Ipermestra" of Metastasio; in 1817 Gioacchino Rossini participated as player of contrabass to the performance of the opera "Italiani in Algeri". After this some of the beautiful eighteenth-century decorations were in part destroyed and in part stolen by some unknown natives of Florence in 1819. From 1819 to 1820 another restoration was carried out; some workers of Florence destroyed, under the leadership of Cecconi, the decorations and the eighteenth-century stucco works. The theatre of 1819 was remarkably inferior to the previous one and then it was not beloved from the natives of Spoleto who desired a larger and richer theater, for this reason some citizens tried to set afire it in 1853. The theatre, delivered in 1880 completely renewed, was in that occasion called Caio Melisso, in honour to the Spoleto native friend of Mecenate, a trusty librarian of Augusto, writer, playwright and grammarian, whose work is completely lost. Inside the building we can admire the decorations of the ceiling and the curtain, works of Bruschi and Panetti and in its present aspect the theater is a work of the architect native of Spoleto Giovanni Montiroli (1877-80), after a long neglect it was restored in 1958 from R. De Luca.